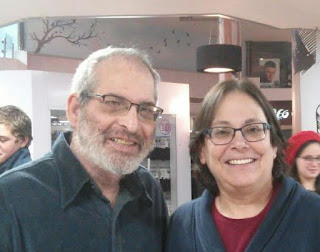 My mother passed away after a decades long illness on Erev Shabbat Chol Hamoed Sukkot.

The day that I returned from NJ to Beer Sheva after the funeral and shiva, my back was in bad shape, so I was spending most of my time lying in bed when my cellphone charger stopped working, leaving me feeling rather disconnected from the world.

I managed to post a request on facebook asking for someone in my neighborhood to lend me a charger. Dov and I were facebook friends and live in the same neighborhood, but had neither met face to face nor had any facebook communication.

Dov responded and brought me a charger and we talked a little. Then we met at a cafe and schmoozed for a couple of hours and very soon we found ourselves meeting on a daily basis. The rest, as they say, is history.

I'm thinking of framing and hanging the cellphone charger.