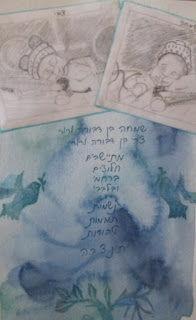 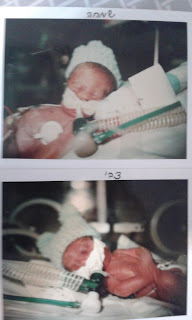 Sometimes I share very personal stories, and I, and perhaps others, wonder why I am doing so. Truthfully, I just feel compelled to do it.

And then, inevitably, I am contacted privately by someone who had a similar experience and a bond between us is created. Hence my motto, "Keeping secrets separates people and sharing experiences connects people."


Remembering Simcha and Zvi, who were born and died in February, 1976

They were born when I was 19 years old, in the 27th week of pregnancy, during our first year of marriage. They each weighed about 2 1/2 lbs.

It was in the early days of ultrasound, and mine did not reveal that I was carrying twins. Only after Simcha was born, did the doctor say, "Wait a minute, there's another one!" and Zvi emerged.

For years after that, I had dreams in which the doctor repeated this sentence over and over until I had given birth to 6 babies. They looked like newborn mice and I carried them around in a shoe box.

The NICU staff recommended that we give the twins names right away, as it helped their caregivers to bond with them. The local rabbi also encouraged this so that they could be better prayed for. We named then after two of their great grandfathers.

After 3 days, Zvi suffered a cerebral hemorrhage; he was brain dead. At the time, he was on a respirator, which was set at a very high oxygen level.

The topic of euthanasia was raised by the medical staff, and we appeared before the medical ethics committee of Harvard University Medical School, with which the hospital is affiliated. The committee consisted of 3 religious leaders: one Christian, one Jewish and one Moslem. We also consulted with our own rabbis.

It was decided that, although active euthanasia was not permitted by Halakha (Jewish law), passive euthanasia was. So, no new treatment was initiated, and Zvi was allowed to die. He died 5 agonizing days later, when he was 8 days old.

Meanwhile, Simcha was doing quite well. Although he was on a respirator, the oxygen levels provided by the machine had been gradually reduced as his condition improved, until the doctors decided that he could be taken off the machine entirely. The doctors recommended that we begin searching for a doctor who could accompany us on a plane trip back to New York, where we lived.

However, Simcha was unable to maintain independent breathing, and tests revealed that he had patent ductus arteriosis, a condition in which a duct in the heart that is open in utero, and usually closes up after birth, does not close. It is common in preemies.

Surgery was needed to close the duct. The doctors reassured us that they had never had a patient die as a result of the surgery. Apparently, Simcha was the first. He was 15 days old when he died.

The twins were buried in the cemetery in Massachusetts where my father-in-law was interred. There were no funeral, Shiva, or matzeva (tombstone), according to the custom for babies who live less than 30 days.*

The twins' father dealt with the loss by never mentioning them again, and requesting that I not mention them to him. He wanted to forget.

I needed to talk, but was discouraged from getting professional help. Life just went on, almost as if Simcha and Zvi had never existed, except in my mind, where I relived those 15 days, over and over.

Time passed. We went on to have 6 live, healthy children, B"H.

As time went on, the pain, trauma, and sense of loss lessened until I rarely thought of the twins at all.

One day, about 25 years later, I was watching a talk show in which one of the guests in the audience spoke of her infant son, who had only lived one day, saying that sometimes, in the middle of the night, when everyone was sleeping, the electronic toys in the house would suddenly turn on and make noise or move around. She believed that it was her dead baby's soul communicating with her.

Moments later, the smoke alarm outside the room that I was in started blaring. There was no smoke or fire and the battery was working, so that there was no obvious reason for the alarm to be sounding. I felt as if my babies' souls were calling to me. I heard them telling me that they were sad that I never thought of them.

I had only been to their unmarked grave site once, just before we made aliyah in 1983, as my father's German Jewish custom was that children do not visit cemeteries while their parents are still alive. At the time, I had no idea that I would travel back and forth fairly frequently between Israel and the US, and I was afraid that I might never see their burial site.

I asked my father for permission to go to the cemetery, and he granted it. After I went, I was able to keep an image in my mind of where they were buried. I found this to be a comfort.

Now, twenty some years later, I decided to visit them again. When I did, I felt that the souls of my boys were happy that I had come, and they "told me" that they would always be with me.

Later on, I was told by a Mekubal (Kabbalist), that the fact that they lived 8 days (7 + 1) and 15 days (7 + 7 + 1), was a sign that they were not one of the 7 reincarnations that exist within his understanding of gilgul neshamot (reincarnation), but rather angels, a different entity.

Today, at significant moments, I feel Zvi and Simcha standing by my side, like 2 guardian angels. And I feel their pleasure when ever I think of them.

* I understand that today, this custom is being challenged. I wish we had challenged it; it would have helped me to heal.

See "To Mourn a Child: Jewish Responses to Neonatal and Childhood Death," Edited by Jeffrey Saks and Joel B. Wolowelsky, OU Press, 2013